If you’ve been watching the news lately, you’ll know that the White Rock pier has been torn in half a huge storm and its future is uncertain. The White Rock pier is my favourite place to photograph so I go down there about 5 days a week for sunrise and sunsets. I am drawn to the pier because it’s a local treasure and historical landmark. 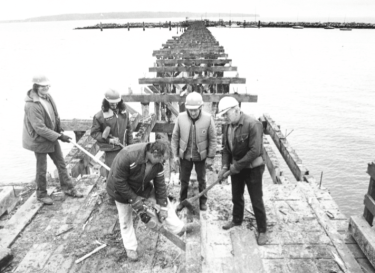 Construction workers working on the pier in 1914

The White Rock pier is a local treasure and a popular tourist destination.

There is word that a daredevil wants to jump the pier on motorbike.

There is word that the pier will be rebuilt by late August of 2019. It will cost approximately 6 million. Stay tuned for updates.

The pier has had waves of change this year and only time will tell what its future holds. When will it be reopened? Who will fund it? Will there be a restaurant built again on the pier? Will the daredevil jump?

What do you hope to see happen?

I am an 19 year old photographer from South Surrey, BC. I was inspired to get into photography through my family. Photography is my passion as it offers many different ways to be creative. I mainly shoot landscape but would love to expand my work. I’m still learning and would appreciate any constructive criticism. View all posts by ethandphotography